Aspen’s Sterile Focus Brands comprise Anaesthetics Brands and Thrombosis Brands, predominantly distributed to hospitals for use in an acute setting. The basket of established products and brands is largely niche with a weighting
toward emerging markets.

All commentary in the Business segment overview reflects CER performance. 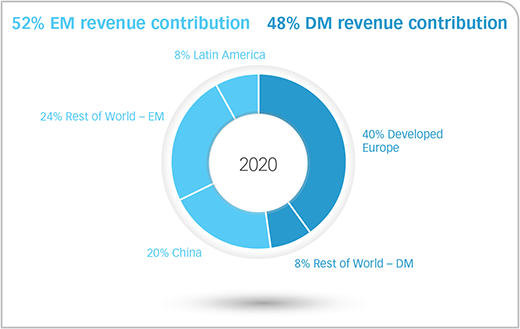 The strategic capital investments undertaken to bring the manufacturing of our Anaesthetics Brands in-house will expand our sterile manufacturing production capabilities and ensure the sustainable supply of high quality anaesthetic products. Our comprehensive product basket includes general anaesthetics, muscle relaxants as well as a number of local anaesthetics including topical agents, making Aspen a leading global supplier in the Anaesthetics category, outside of the USA (where Aspen does not presently market anaesthetics).This portfolio provides reliable solutions to support the anaesthesiologist in the choice and combination of medication, dose, route and techniques, considering the risks to and benefits for the individual, improving the clinical experience for patients.

The Anaesthetics Brands portfolio increased revenue by 2% for the 12 months ended 30 June 2020. The portfolio, which is largely supplied into hospitals, experienced a mixed impact due to the COVID-19 pandemic. Early during the pandemic, China underwent a hard lockdown resulting in the postponement of elective surgeries. Anaesthetics Brands sold in China, such as Naropin and Diprivan, experienced a marked drop in demand. Contrastingly,the first wave of COVID-19 resulted in increasing demand for our Anaesthetics Brands across other major territories, namely Europe and Latin America, where annual revenue increased 8% and 13% respectively. The increased demand from Europe and Latin America occurred across both general and regional anaesthetics segments.

Developed markets, which contributed 48% to revenue, increased by 6% to R3 788 million. Developed Europe contributed 34% of revenue, increasing 14% to R2 677 million. During the first half of FY2020, interventions made to our commercial approach across Europe and improving Anaesthetics supply conditions supported top-line growth of this therapeutic segment. During the second half of the financial year, general and Regional Brands experienced elevated demand associated with usage in hospital for the treatment of COVID-19 patients.

* All commentary in the Business segment overview reflects CER performance.

Developed Europe and Asia Pacific, contributed 47% and 46% to developed markets revenue respectively. Developed Europe decreased 3%, recording revenue of R2,2 billion. The EU5* account for 77% of the value of the European^ injectable anaesthetic market and represent those countries where we generate the majority of our revenue from these products. Asia Pacific declined 3% to R2,2 billion. Supply constraints were particularly challenging across Australasia which was 9% lower. Despite supply constraints, commercial efforts promoting Xylocaine were successful, supporting positive growth in the brand across major customer geographies.

Australasia decreased 3% to R665 million. Prior to the lockdown, demand increased ahead of the expected increase in hospital admissions, however, limited usage, likely low due to a well-controlled first wave (as compared to other countries), resulted in low demand in the fourth quarter as the channels were sufficiently stocked. Following the first wave, certain Australian states remain subject to a level of restriction and the country has not yet experienced coordinated resumption of elective surgeries.

Emerging markets contributed 52% to Anaesthetics Brands revenue and declined 1% to R4 179 million. The positive performance of Latin America, MENA and sub-Saharan Africa were offset by declines in Developing Europe & CIS and China.

China, which contributes 50% of emerging market Anaesthetics Brands revenue, decreased 2% to R 2 078 billion due to low demand during the restrictive lockdown which took place between February 2020 and April 2020. The demand trend in China began recovering
as the economy normalised and reopened with demand returning to prior normal levels towards the end of the financial year. Latin America is the second largest emerging market territory by revenue contribution. Revenue grew 13% to R994 million, driven by volume growth associated with anaesthetics products being included in COVID-19 treatment protocols and guidelines as well as improved supply. Developing Europe & CIS was negatively impacted by postponed elective surgeries and the low level of hospitalisations during the first wave of COVID-19. Revenue in Developing Europe & CIS declined 42% to R174 million. The less severe COVID-19 infection rate has allowed certain countries in this region to resume hospital functions such as elective surgery at a slightly faster pace than the overall trend.

Our investment in Anaesthetics increases our exposure to complex sterile products which are required on a day-to-day basis in healthcare facilities globally, allowing our business to benefit from the wider trends of increasing access to healthcare and demographics. The decision to invest in additional sterile capacity, some of which is intended to bring a large portion of the Anaesthetics Brands into our manufacturing facilities has been done with the aim of improving the underlying cost of goods for these products thereby providing a competitive cost base, providing scope to increase patient access to our quality medicines. The new sterile facilities have been constructed with surplus capacity, allowing for the potential increase in volume of the Anaesthetics Brands over the long-term as well as positioning us as a niche sterile specialty manufacturer capable of pursuing partnerships with other pharmaceutical companies.

Our Thrombosis portfolio is a global offering (excluding USA) which comprises a broad range of specialist injectable anticoagulants. Our niche products are complex to manufacture and our fully integrated biochemical supply chain for heparin-based products combined with our sterile manufacturing capabilities allows us to respond to market and production needs as well as to execute control over the production of our high quality Thrombosis products. In addition to the heparin-based anticoagulant portfolio, Aspen also produces Arixtra, a synthetic anticoagulant not impacted by the supply and pricing dynamics of the market for heparin-based products. Arixtra is a Xa Inhibitor with a wide range of indications, including venous thromboembolism treatment and prophylaxis, deep vein thrombosis, pulmonary embolism and acute coronary syndrome treatment. Growth in ageing populations and our adapted dose for obese patients, provides growth potential for Arixtra. 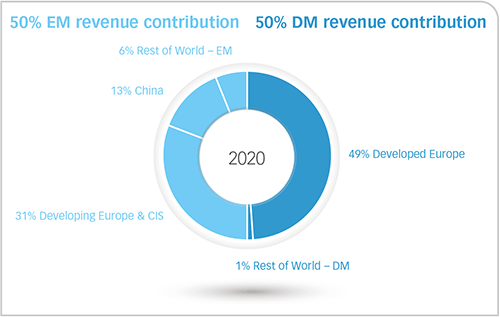 Thrombosis Brands revenue declined 5% to R6 296 million. The Thrombosis Brands are sold into hospitals and dispensed in pharmacies to patients with prescriptions.
COVID-19 negatively impacted demand for Thrombosis Brands due to the postponement of elective surgeries and limited demand for the treatment of clotting disorders in medically-ill COVID-19 patients across our key regions namely Developed Europe, Developing Europe & CIS and China. The protocol around the use of anticoagulants for the treatment of patients presenting with COVID-19 became more established towards the end of the financial year resulting in muted demand benefit to Aspen.

According to a recent IQVIA* study tracking weekly cardiovascular volume growth trends between the week ended 30 December 2019 and 7 September 2020 across the EU5^^, growth in anticoagulant volumes were flat to marginally positive year-on-year across the EU5^^ countries.

China declined 12% to R815 million, negatively impacted by almost no demand during the period of severe lockdown restrictions, namely February to April 2020. The demand trend began recovering thereafter and returned to prior normal levels towards the end of the financial year. The LMWH market in China largely comprises Nadroparin, Enoxaparin and Dalteparin which combined account for more than 90% of this therapeutic area. In contrast to Europe, where Enoxaparin is the leading LMWH by volume and value, Nadroparin is the market leading LMWH in China, with almost a third of the market. Aspen’s Nadroparin, Fraxiparine competes against local generics and is mostly administered in haemodialysis treatment.

Russia CIS experienced a temporary benefit in the period due to Fraxiparine and Arixtra being included in protocols and guidelines for patients presenting with COVID-19.

In March 2019, Aspen announced that we would undertake a strategic review in respect of our Europe & CIS (defined as Developed Europe and Developing Europe & CIS) Commercial business. The review focused on assessing alternative models for the conduct of the commercial operations in Europe & CIS and the range of available options with a view to optimising the Group’s sustainable returns. On 8 September 2020, we announced that we had reached agreement for the divestment of our European Thrombosis Business (excluding Russia and the remainder of the CIS) to Mylan while retaining the manufacture and supply of the products at our FDF facility at Notre Dame de Bondeville in France (see page 100 of the Annual Financial statements for further detail). Following the conclusion of the transaction, expected to be before 31 December 2020, our remaining Thrombosis Brands territories will be mostly characterised as emerging markets where our trusted brands are well placed to support the increasing medical needs of these growing populations.

The retention of the manufacture and supply of the divested Thrombosis Business in Europe ensures essential volumes are retained within our sterile manufacturing facilities, allowing for efficiencies and synergies in costs for both Mylan and Aspen’s Thrombosis Brands businesses.

After the disposal of the Europe region of the Thrombosis business, China will be the largest remaining territory. Given the return to more normal trading patterns after the hard lockdown in China, prospects of a strong recovery performance from LMWHs in this country are good. Aspen also commercialises Arixtra in China and the outlook for increasing the volume growth for this product is predicated upon the broadening of Arixtra’s indications on the National Drug Reimbursement List. The review of this list by the Chinese regulator was expected in 2020 but has practically been delayed due to COVID-19.