The Thrombosis portfolio is a global offering comprised largely of a broad range of specialist injectable anticoagulants. Our portfolio also includes Orgaran which is a heparin derivative (heparinoid) indicated for the treatment of HIT. HIT is an adverse reaction occurring in a limited number of patients undergoing heparin related therapy. We offer healthcare providers the advantage of a single supplier that addresses broad clinical needs and thus ensures the optimal care of patients at risk of thrombosis.

Growth in the injectable anticoagulant segment has been stable despite increased competition from oral anticoagulants and biosimilars. Our competitive advantage lies in our ability to effectively compete in this segment due to our vertically integrated supply chain for heparin-based products.

Thrombosis revenue grew 12% to R6 430 million and was positively impacted by the addition of Fraxiparine and Arixtra in China halfway through the 2017 financial year. Furthermore, positive revenue growth was recorded across all brands in the portfolio.

Developed markets contributed 55% to revenue and grew 7% compared to the prior period. Approximately 80% of Developed market sales were in Germany, France and Italy.

Developed Europe revenue improved 8% to R3 471 million for the period. While all the brands in the portfolio posted positive growth for the year, Arixtra was the most significant contributor to revenue growth. We are encouraged by the positive performance of the portfolio in Developed Europe in the face of challenging regional macro factors.

Emerging markets contributed 45% to revenue and grew 18% compared to the prior period.

Developing Europe revenue grew 7% and contributed 65% to Emerging market revenue. Growth was a result of targeted promotion and increased retail sales which helped offset rising pressure from generics and biosimilars. Despite not having EDL status, we maintained Arixtra’s leadership position in the hospital segment of injectable anticoagulants in Russia. Our Fraxiparine brand retained its market leadership across key Central and Eastern European countries such as The Czech Republic, Slovakia, Bulgaria, Serbia and Romania.

Revenue from Asia (excluding Japan) was R767 million for the period. Our focus in China is on broadening indications and increasing the penetration of our Arixtra and Fraxiparine brands acquired in the prior period.

Post-acquisition, our immediate focus was integrating the Thrombosis portfolio into our business and upgrading the acquired sites in order to cement our position as a leading steriles manufacturer. As most of the investment has been bedded down, we have been able to shift our focus towards strengthening our commercial strategy.

Our main strategic focus is to grow volumes through clear segmentation and targeting, increasing market penetration in under-serviced regions and leveraging off our supply chain capabilities. We expect to launch Orgaran into more European territories following registration in the 2019 calendar year while the potential launch of Orgaran in the USA with the HIT indication remains a significant opportunity.

Over the period, we successfully transferred the manufacture of Fraxiparine and Mono-embolex vials to our Port Elizabeth site. The transfer of Mono-embolex prefilled syringes to our Notre Dame de Bondeville site is complete and commercialisation began in the first half of the 2019 financial year. We also developed and implemented a new safety device for the Arixtra and Mono-embolex shield which has enhanced manufacturing efficiency and patient safety. The certoparin API facility at Notre Dame de Bondeville was completed in the second half of the 2018 financial year and we have commenced the production of validation batches. There has been considerable time and effort spent on conversion efficiencies which we anticipate will offset the negative impact of the current heparin price increases dominating the market. 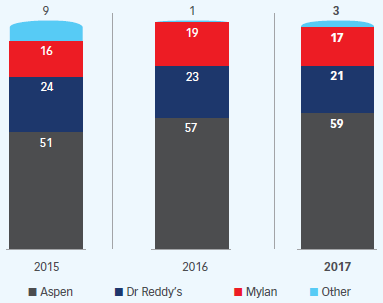