The High Potency & Cytotoxics portfolio includes products that generally contain APIs which evoke the indicated response when administered at a low concentration. This portfolio mainly comprises Oncology, Endocrinology and Women's Health products. During the 2017 financial year, we acquired two conjugated estrogen brands from Teva in order to bolster our Women’s Health portfolio which has been identified as an important potential growth segment.

We officially opened the high containment suite at our Port Elizabeth facility in May 2018 where we plan to manufacture some of our key high potency products including Alkeran, Leukeran and Imuran. This is aligned to our strategic objective of managing and controlling our own supply chain in order to enhance security of supply. The strong base of API capabilities at our Oss and FCC sites also presents opportunities for vertical extension into finished dose offerings within the High Potency & Cytotoxics category.

Developed markets contributed 58% to revenue and declined 10% compared to the prior period. The lacklustre performance was largely driven by the United States and Developed Europe.

Developed Europe, which makes up 34% of High Potency & Cytotoxics revenue, declined 7% for the period. While Ovestin recorded positive revenue growth, this was largely offset by pricing pressure as a result of generic entries which affected the oncology products.

Revenue from the United States declined by approximately R150 million compared to the prior period. We reduced Leukeran pack sizes as the bigger pack size was not optimal for our customers. Performance was negatively impacted by product returns of the larger pack size from the trade following the change.

Japan revenue declined 2% as a result of regulated price revisions. Revenue growth for Imuran was, however, positive, reflecting the success of the local promotional partnership agreement we entered into in the 2017 financial year.

Emerging markets contributed 42% to revenue and declined 8% compared to the prior period. The decline in revenue was mainly attributable to China and Russia.

We have transitioned the manufacture of Ovestin, which is a key brand in this segment, from a contract manufacturer to our Bad Oldesloe site where our Eltroxin and Lanoxin brands are also manufactured. We experienced a delay in securing the necessary regulatory approval in China which negatively affected revenue growth. Ovestin revenue in Algeria was also impacted by a strategic stock build in the prior period which was necessitated by the site transfer.

Russia was negatively impacted by de-stocking in the market due to tighter liquidity pressures on wholesalers.

Commercial production of Imuran at our Port Elizabeth facility commenced in the first quarter of the 2019 financial year. The successful transition of Imuran is supportive of growth in the High Potency & Cytotoxics portfolio as it is expected to limit supply disruptions which have had a negative and, in certain instances, a lasting effect.

Our key focus in Japan is to further grow Imuran through targeted commercial activities which include broadening indications, co-promotion and the use of online platforms.

We anticipate continued pressure from generic entries in Europe, particularly the oncololytics. There are a number of initiatives in place aimed at maintaining market share including line extensions and increased key opinion leader engagement in order to raise awareness and reinforce brand positioning.

We launched esterified estrogens in the United States in the second half of the 2018 financial year, while trial batches are underway with regards to the synthetic conjugated estrogens. In respect of the low dose estradiols, the US FDA has requested dose finding studies for which trial design and planning is currently taking place. 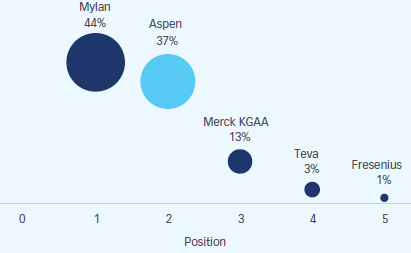 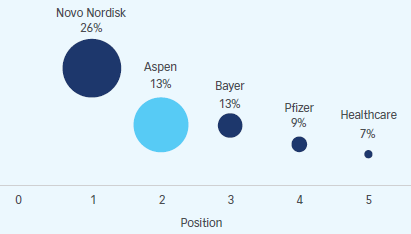